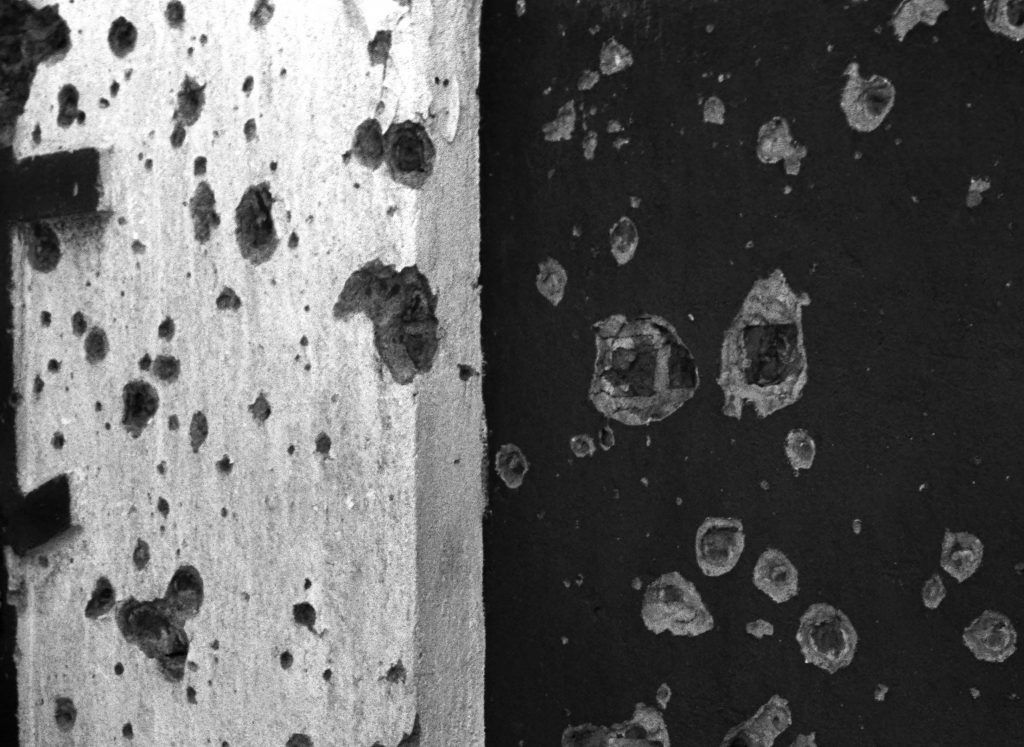 The photographer of war works in a distanced and accurate manner at the same time. The hunt for the moment – the shot behind the shot – can be placed as a description above all war photographs we know. It only encompasses the craft; it is that of the sniper. The art that sets the image apart from the event is the distinction from moment to moment. There is only the one that makes a photograph what it is. Thus, the motif of the game is added to that of the hunt. A third is that of philosophizing. The photographer at war has the least time for this.

For photography, whether analogue, digital or whatever else, Vilém Flusser’s remark about the “gesture of photography” still applies, that reflection is as essential in photography as manipulation. Those who photograph manipulate: by choosing the location, the situation, by their presence. Those who take photographs reflect: by deciding NOW to press the shutter release. “But what is true for photography is also true for philosophy and entirely true for life.” For the photographer at war, it also applies to death, the violent death.

It would be too easy to say that the frequently iconic character of his pictures is related only to the proximity to orthodoxy that prevails in Klimov’s photographic domain. It expresses just as well the attitude the photographer takes towards the subject. It is religious in the sense of faith: in the process, in the situation, in the actors he captures in the image, cut out of time in a moment that can be fatal for those whom Klimov – possibly – takes into eternity at the same moment.

For all images one: Grozny, 1995. Two women in front of the shot chapel, the cross or what is left of it, protrudes from the wall covered with bullet holes, whose border between black and white divides the image into two halves, the left of the women kisses the cross. The silence after the war, or pause between two battles, leaves both women the moment from rest entirely. They have had a lifetime of work and at least one war, now the next one has them. The woman in flowered headscarf and flowered dress left in front of the white corner of the wall stands like a mirror in front of the scars in the stone. They overgrow in the form of flowers, strange mollusks, removed organs, the plaster, at the mouth kissing the cross, a bullet hole like a failed Mickey Mouse head. Towards the left edge of the picture, the erosion of the material continues in the lattice of the gate wing, while the right half of the picture/black corner of the wall curves over the sitter in likewise flowered dress, like a tapestry from which the bullet sheaves have torn the white from the texture. She looks past us viewers, like the negative of the neighbor to the left, into the time from which the bombs came, with her mouth open and telling. The women and the shattered wall that Klimov lifts out of time diffuse in the black and white of the photograph into a matter, a surface, an open page of the War Primer that wordlessly shows both text and image. What we call the drama of war takes place in Klimov’s photograph as a still life. He reminds us in the most peaceful of all forms what drama is: description of an image.

The photographer shoots with the camera, he must be convincingly one with his craft, which visually analyses another craft. For the war photographer, it is the craft of killing, and it is the same whether it concerns the attacker or the defender. The photographer has no right to make a moral distinction here. He needs, in the eye of conflict, the cold gaze that condemns only one thing, war.